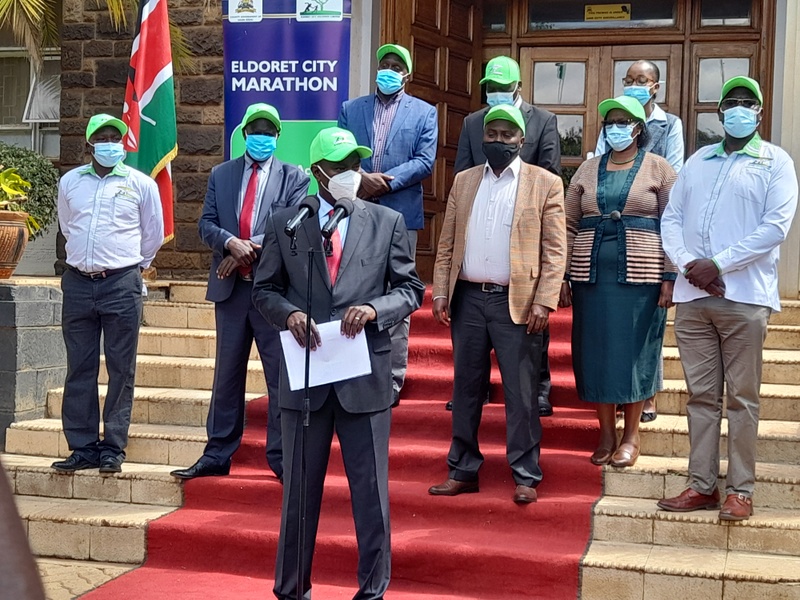 Following new Covid-19 directives released by the Kenyan President on March 26th, which banned all sporting activities among other restrictions, the third edition of Eldoret City Marathon, originally scheduled for April 11th next month, has been postponed indefinitely. The postponement communication was made by the Governor of the County Government of Uasin Gishu, who is also the patron of Eldoret City Marathon, H.E. Jackson Mandago. The Governor promised that the marathon would resume as soon as the restrictions are removed as everything was already in place. He sincerely thanked the sponsors and partners for standing with the event and promised athletes who had registered that their registration was still intact and they would not need to register or pay again once the race resumes. The Governor further appealed for athletes to continue training to remain in top shape and for those who had not registered to do so as registration remains open. He noted that the climate action campaign would proceed albeit in small groups. Tree seedlings, including 2,000 donated by the Greece Embassy will be planted at Eldoret Arboretum, Kapseret Forest, and at vocational training institutes. The target is to plant and/or distribute 1 million tree seedlings during the rainy season. This will be achieved in partnership with the Kenya Forest Service, learning institutions, and the Eldoret City Marathon sponsors and partners. In conclusion, the governor asked citizens to take personal responsibility for their safety by observing Covid-19 protocols including properly wearing their masks and sanitizing or washing their hands regularly with soap.